Vancouver embodies diversity in every sense, partly due to its global connectedness. Business-friendly immigration policies, coupled with global access and a welcoming brand, make Vancouver a top choice for professionals, international innovators, and companies delivering services that cross national and cultural boundaries. More than 80 countries maintain a consular presence in Vancouver, providing institutional support for the many foreign-based firms doing business here. 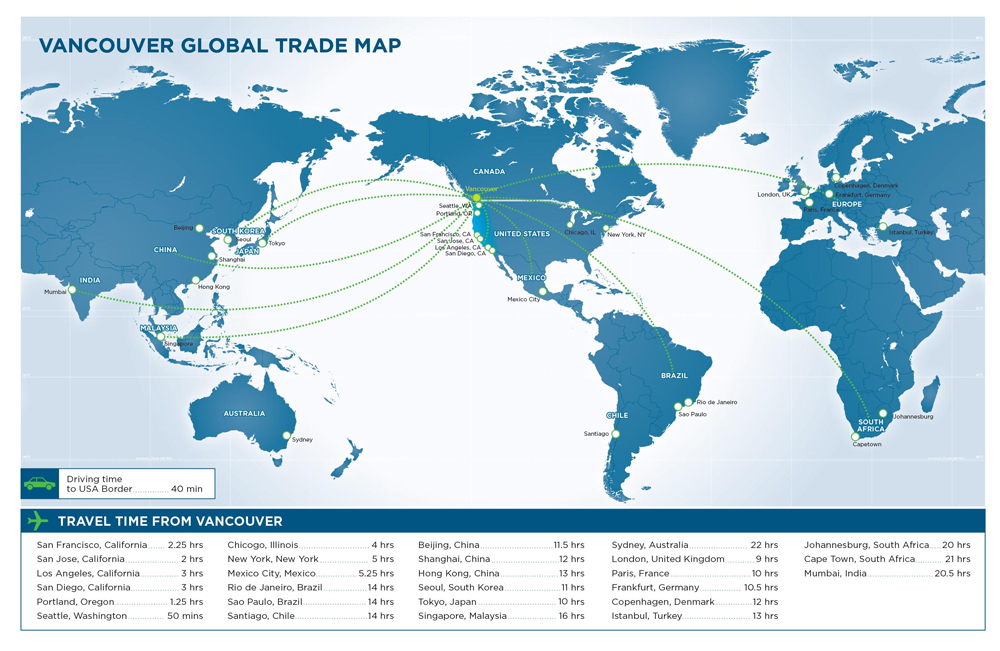 Vancouver’s location offers a compelling edge for businesses – the coastal destination boasts the shortest distance to Asia from any major North American city, as well as ready access to US power markets like Washington State and California. Vancouver’s time zone is also a plus, with same-day access to global centres that include London, New York and Hong Kong.

As trans-Pacific traffic grows, government and other partners are making significant investments to upgrade the capacity and efficiency of Vancouver’s global gateway. That includes regional transportation investments into TransLink, the city’s transit authority, enabling better service for locals and visitors, lower emissions, and healthier and more livable communities.

The Port of Vancouver is the largest port in Canada, and third largest in North America due to its tonnage capacity. It’s home to 29 major marine cargo terminals, served by three Class 1 railways, and offers a full range of facilities and services to the international shipping community. It’s also the only port in the world offering one-way and round-trip cruise itineraries through the Inside Passage, a scenic route that meanders along BC’s west coast to Alaska (fun fact: each cruise ship that docks in Vancouver contributes $2 million to the local economy). Plus, in keeping with Vancouver’s commitments to sustainability, more than 60 percent of cruise ship calls starting in 2022 are expected to be shore power enabled. The technology allows ships to shut down their diesel-powered auxiliary engines and plug into low-emission electrical power, helping to reduce more than 24,000 tonnes of greenhouse gases.

Vancouver International Airport (YVR), Vancouver’s award-winning airport, with consecutive yearly wins, is a swift 26-minute ride from downtown thanks to the Canada Line, a direct rapid-transit link. Fifty-six airlines serve YVR, connecting people and businesses to 125 non-stop destinations in Canada, the US and around the world via chartered and regularly scheduled flights. Regularly ranked among the best airports in the world, YVR scooped up Skytrax’s annual honour for number-one airport in North America for 12 consecutive years. In summer 2022, the airport debuted an expansion to its Pier D international terminal, dramatically increasing capacity to accommodate its surging passenger load. The expansion added 300,000 square feet of floor area, including eight additional gates and new services and amenities.

Global logistics planning and efficient delivery strategies are helping create a strong warehousing and distribution industry, so critical as demand for just-in-time shipping grows, while increasingly streamlined customs procedures between Canada and the US are helping companies on both sides of the border.

Some reasons why Vancouver is such a Global Gateway